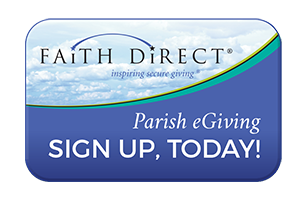 Prior to 1911, Catholics who resided in the little farm village of Geistown rode in wagons or walked over a dusty – or snow-covered – road leading to St. Joseph’s Church in Johnstown. The trip home was even more exhausting because of the steep grade of the road. Because of their great love for God, these pioneers accepted the sacrifice necessary to attend Mass and pass on their faith to their children. Only illness prevented them from making the trip.

As early as 1893, a little chapel was built at the rear of St. Joseph’s cemetary on part of the Joseph Geis farm, where Civil War soldiers had once camped. However, the building was never used for Sunday Masses because no priest was available. It was used on All Souls Say and occasionally for a funeral.

Although there were only 16 Catholic families in Geistown, they approached Fr. Maximilian, a Benedictine from St. Vincent’s Archabbey in Latrobe, and asked him to help organize a mission church. Bishop Garvey gave his consent, and we became a mission of St. Joseph Church with the first Mass celebrated on May 11, 1911. At first, Mass was held only every other Sunday, but soon was held every Sunday.

In November 1911, a one-room school was built. Franciscan Sisters Mildred and Aloyse from Millvale staffed the school, which at this time, found the older students in the Church and the younger ones in the one-room school. On December 1, 1912, a new four-room school, housing eight grades, was dedicated and opened.

After the death of Father Max, Fathers Valerian and Roman served as pasters. The school faculty grew to four with the assignments of two more sisters.

In 1930, Bishop McCort declared St. Benedict’s as an independent parish and appointed Father Cletus Barroner as pastor. The church was moved from its home in the cemetery and placed on the site of our present church. Soon, two wings were added to meet the needs of the growing parish.

In 1962, the little wooden church was razed to make way for our present church.